These days, 5G home internet networks are all over the headlines. Despite the fact that many company owners are aware of the word, not everyone knows what 5G is, what its primary advantages are, and how it may improve business.

The fifth-generation technology for public wireless networks is known as 5G. While the naming practice makes it seem gradual, 5G is more of a leap ahead than an evolution from 4G. Large radio towers are used to transmit signals across great distances utilize lower frequency radio waves in 4G networks.

Many more small-cell antennas will be linked to buildings, streetlights, and other objects in 5G networks. Using an ultra-high-frequency spectrum, these minuscule cells will transport large volumes of data across short distances. The 5G networks of the future will be made up of a mix of diverse network access points, frequencies, and cloud-based network technologies.

Businesses will benefit from three major characteristics of 5G networks:

The term “latency” refers to the time it takes for anything (such as a data packet) to be delivered and received. 4G latency is now about 50 milliseconds. The latency of 5G will be about one millisecond, or one-thousandth of a second, which is 400 times quicker than the blink of an eye.

Low latency is critical for anything that demands a genuine real-time response, such as self-driving cars and robots that are operated remotely. It also indicates that there will be more chances to employ augmented reality (AR) and virtual reality (VR) in the future (VR).

What are the implications for businesses? Lower latency means organizations can broadcast high-resolution video, music, and photos instantly, without lag or errors. And, resulting in better communication experiences for consumers and distant employees. Businesses who want to employ cutting-edge apps like AR, VR, or 3D will be able to do so more effectively with 5G.

Contractors and interior designers will take customers through virtual rooms before constructing the actual thing, allowing for quicker decision-making and more precise results, while tradesmen will train on how to repair new technology using virtual simulations.

The benefit of connectedness – 5G

Increasing the network’s capacity will increase the number of devices that can connect with one another. Despite the fact that the Internet of Things (IoT) is becoming increasingly extensively accepted. The majority of today’s communication occurs between individuals utilizing smartphones. With 5G, we’ll witness a massive growth in the number of gadgets and machines that can communicate with one another; analysts estimate that 5G will be able to link 500 times more devices than 4G.

Millions of sensors per square kilometer are expected in smart cities in the near future, all linked to the 5G network and enabling IoT devices. This connection will enable governments in controlling natural catastrophes to help preserve lives. And infrastructure by rerouting traffic and assisting emergency services.

What are the implications for businesses? Companies with fleets or machines will be able to utilize IoT in conjunction with Fifth Gen to improve equipment efficiency and utilization. For example, a delivery firm may utilize IoT and 5G to locate a truck’s precise position in real-time. And alerting the receiver and ensuring that the most efficient and effective routes are always in use.

While some companies now utilize IoT for asset management, 5G will make the process much faster and more precise. In terms of warehousing, 5G will enable firms to deploy smart shelves that can detect when a product is running short. And take action to keep the supply chain operating smoothly and effectively.

A significant increase in bandwidth – 5G

Increased bandwidth in 5G will enable very fast download rates, improve apps and reduce bottlenecks. The transition from 4G to 5G will be significant: 4G download rates are 100Mbps. And 5G download speeds will be 10Gbps in the near future. Imagine trying to leave a basketball game with every fan exiting via the same door; that’s what an overburdened 4G network may be like. The enhanced bandwidth of 5G will be equivalent to opening all of the building’s doors. According to early testing, a user could download an HD movie in less than 36 seconds, a TV episode in less than three seconds. And 25 songs in less than one second at 1Gbps.

What are the implications for businesses? With more bandwidth, large video files or presentations can be transferred in seconds. Giving remote employees the flexibility they need to download items on the move. Similarly, no matter where they are situated, remote employees may easily participate in HD video conversations.

The benefits of 5G are many, and they aren’t simply hype. Governments, corporations, and small businesses in Canada are all using 5G to communicate, collaborate, and engage with consumers and partners. The possibilities of 5G are only limited by what companies can dream and develop. So now is the time to think about how your company can take advantage of, profit from, and grow from its potential. 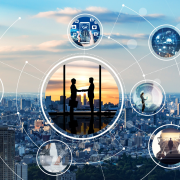 What SEO Services Can Do For You